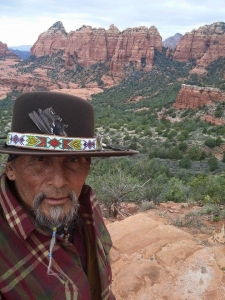 Today, we honor the passing of our beloved George “Elk Dreamer” Sanchez who worked with the Academy in Sedona, Arizona, and who made his ascension at the time of the summer Solstice (June 2019). George was a gifted wisdom keeper and “spiritual” guide for thousands of visitors to sacred “native lands” in the American southwest, especially in the areas of Sedona and northern Arizona. Among his famous guests from all over the world was Maria Schriever, niece of John F. Kennedy. George carried both the bloodline of the Arapaho indigenous tribe and the Yaqui of the Southwest where his mothers family originated.

In music and word he was acknowledged as a highly “knowledgeable interpreter” of the meaning of artifacts at the archaeological ruins around Mayapan, Chichen Itza, Nueva Altia, and those deep in the jungles and cenotes of Yucatan. 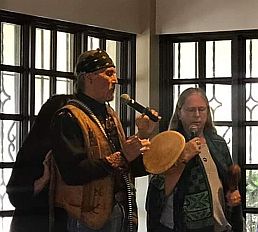 and music at our annual Conferences and gatherings and recently inside the Integratron at Giant Rock built by famous engineer, George van Tassel, a member of Howard Hughes engineering team who claimed contact with extraterrestrials in the 1950s (see film by Jonathan Berman, Calling All Earthlings, 2018).

George was also a devotee of the Divine Mother and loved the ancient songs of the four corners of the earth.

Now we can say hear him say as one who lives in the Temple of Eternity the words of the Psalmist, “I was glad when they said unto me, let us go into the House of the Lord.” Mehayyai Hametim (12x).